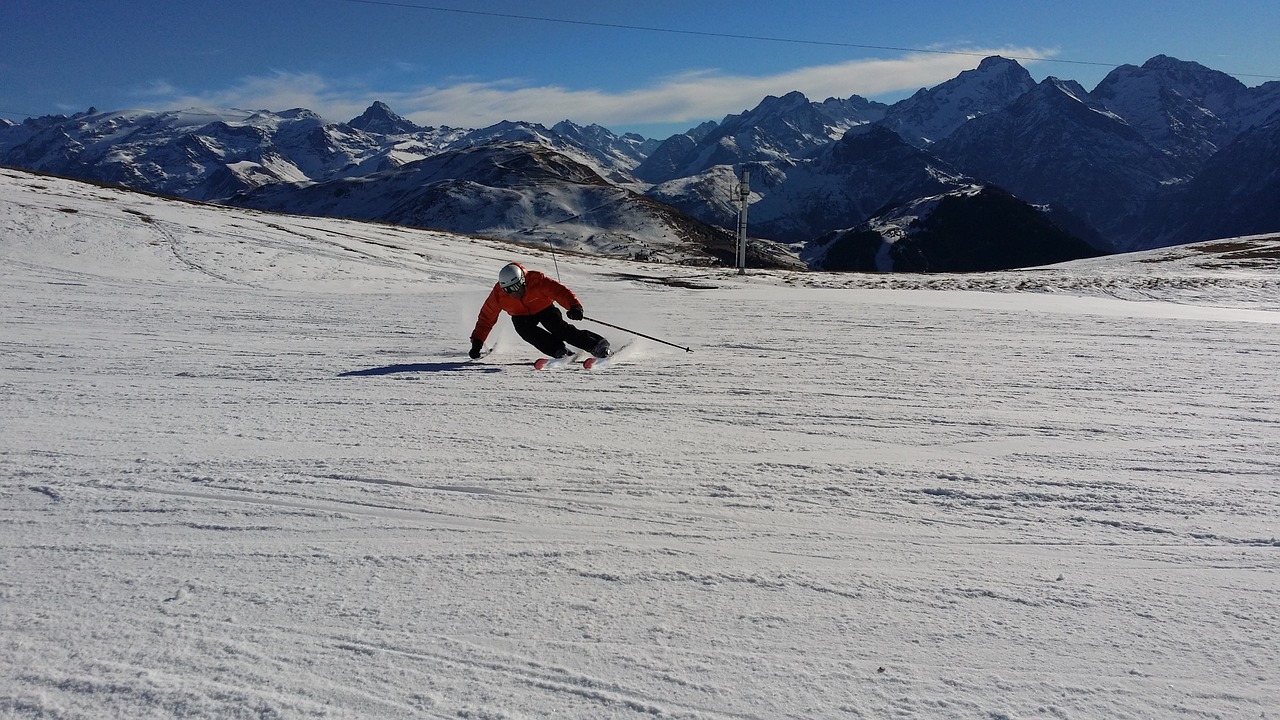 Read on as we will be highlighting the major differences between parallel skiing and carving skiing. 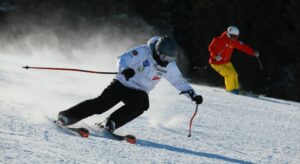 Parallel skiing is the type of skiing that has the skis being parallel to each other rather than looking like a snowplow (having the front end of the ski move inwards and the back end having an outward position).

Parallel skiing is usually not done by beginners; it is advisable to be left to the intermediate-level and expert skiers. This is because it creates more momentum downhill caused by the posture taken by skiers and the pull of gravity, which proves not to be a good start for beginners. A snowplow technique is a wiser choice for starters until further advancement in experience and skill is achieved.

For parallel skiing, balance is everything. You would need to know how to balance your whole body weight on both skis evenly, and the fluid transfer to weight to the inside part of your ski especially during turns. For turns, you would have to be able to bend your knees the right way for your weight to be transferred to the inside part of the ski; this could prove difficult for starters but with time it can be perfected.

Parallel skiing helps you understand more about the edges of your ski and its exact position; those body weights would need to be placed right on the edges as they grip the snow for skiing and turns. In areas of turns, the poles held by skiers would be needed for an even weight distribution between the upper body and the edges of the ski.

For most people, parallel skiing is an advanced snowplow learned over-time. The combination of both techniques is popularly referred to as a plow parallel.

When parallel skiing or even performing carving skiing, the right ski size varies with the skier. The ski should match your body weight, height, and skiing style.

An example of a ski right for a skier whose height is about 72 inches (183cm) would be one ranging from 170-190cm in length. However, a shorter ski size is recommended for beginners or intermediate skiers if they weigh less than their height.

Starting a parallel ski, you would need to extend your body in an upward and forward position ensuring your body weight is evenly distributed on both skies. Doing this causes you to gain more speed moving downhill.

For parallel skiers or carving skiers in a Northern American region, there are different sets of slope markings indicating how steep a slope is.

The green (circled) marking is for beginners in the skiing world, these slopes are barely steep. The blue (squared) marking is for intermediate-level skiers, with steeper slopes; (experts might want to go back to this because of the less speed gain during turns that it has).

The black (diamond) marking is for expert slopes and has a very steep piste with the mogul. It should never be tried by beginners, though intermediates could try it.

The double black diamond marking is only for experts, having a huge mogul and very steep piste. Orange markings are piste with terrains allowing jumps and tricks.

Carving skiing is a technique used in making turns in skiing. Carving causes the ski to shift to one side on its edges making it a very smooth and faster-turning technique compared to parallel skiing.

When making this edged turn, it causes the ski to bend in an arc-like form causing the rest part of the ski to follow this arc-like motion till the end of the turn. It basically means the tip and the tail of the ski following the same path, forming series of “Cs” or half of a circle (with consecutive “Cs” forming an “S”).

The carving skill technique is very unique because it causes the ski to maintain a constant speed during a turn unlike other forms of ski turns. Carving skiing can be done by beginners under supervision because it makes turns easier compared to other techniques.

Carving skis are defined by their unique looks; having differences in width between the tip, tail, and waist of the ski. The length of an average carving ski is 10-20% shorter than a regular ski. A shorter ski is lighter and allows the skier to lean in for a better turn.

Skiing performance with carving skis is in no way hindered or reduced because the base surface having direct contact with the snow is the same as the regular non-side cut ski.

Carving skiing is a technique that requires less energy in making a turn. This is a result of the shape and size of the ski. New carving ski designs are such that they have a narrower base under your feet with a much wider tip and tail. The ski moves less snow during each turn making it more efficient. 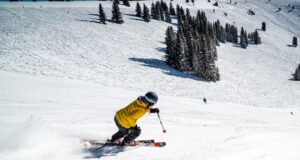 Skiing with carving skis will leave a clear, clean, and thin track mark on the snow. Skiers often enjoy making use of this technique during skiing as it is a quick way of getting down from high mountains and hilltops with less energy usage and more speed.

When carving skiing, due to the nature of the ski, the skier bends the ski in such a way the edge sits in the snow, on its length. The gradient determines how much the ski will have to bend (the size of the turn depends on how much the skier leans over the ski).

Carving skiing is best done by rolling the knees over so the ski digs into the snow with its edges, steering the ski. Once the edges are dug in the snow with the length of edges traveling on it, a turning effect of the ski begins.

However, carving requires the right equipment and snow condition. If the snow is too frozen up, the edges might not be able to dig into it and if it is less frozen, it might be difficult to hold the sideway forces created.

Here are some things to note about carving skiing:

For carving skiers in the European regions, the marking of the slope is coloured slightly different.

Which one is better?

Parallel skiing and carving skiing are both good skiing techniques in their own rights. For most people, it is a choice of what they feel is better for them. So, let us give a breakdown of how one supersedes the other.

Parallel skiing turns are made more by hip movement as compared to the digging effect of carving skiing. The carving skiing technique does it much more easily and efficiently.

In parallel skiing, the initial preparation for turns is better and easier than carving but mistakes like leaning backward or too forward can be made by skiers.

In carving skiing, weight is transferred between the edges and never at the flat surfaces. For some reviewers, the flat surface weight transfer of parallel skiing is better and safer.

For skiers who fancy smooth and cleaner skis, the carving skiing technique is for you. It glides smoothly compared to the skidding effect of parallel skiing.

In summary, the better one of parallel skiing and carving skiing would most likely be carving skiing, for its efficiency, smoothness, cleaner tracks, and less energy consumption.

Which one is faster? 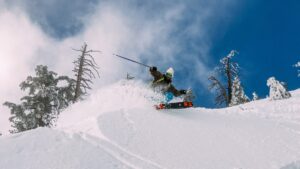 Skiing faster depends on how you want it. You could get fast skiing with smooth movements and less drag or you could get a very fast downhill movement with some skidding in its turns.

Carving skiing makes use of a digging process by the edge of the ski which is used by skiers for faster movement downhill during turns, because of its smoothness and less drag. You get to move fast with less energy being put to use.

However, the body posture of a parallel skiing technique, having an upward and a leaning forward position, gravity helps in making it a very fast way of skiing, even sometimes at skidding turns.

At turns, parallel skiing does not have a constant speed, as it can gradually increase with the pull of gravity (it could be reduced by using the poles occasionally). Carving skiing possesses a quick and constant turning speed.

In as much as parallel skiing and carving skiing are both different techniques used in skiing, they have slight similarities in how they are done and used. This section would be showing some similarities between them. 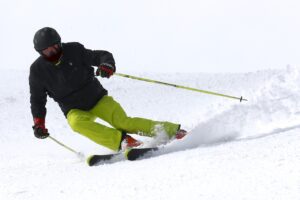 Parallel skiing is a technique in which the skis are parallel to each other. However, for parallel skiing, the parallel skis run in the same direction on a straighter path, with the turns made by the skier’s body movements.

For carving skiing, the parallel motion of both skis moves in the same direction but in a curved manner, with the turns made easier by the skis. Although at some distance carving skiing might look less parallel, it actually is parallel.

In the parallel skiing technique, the weight of the skier is distributed evenly between both skis. The outside edge gets some slight amount of weight just before it moves into the inside edges of the ski.

In position and posture 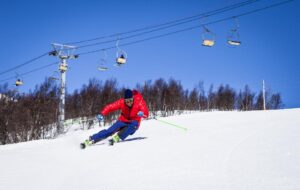 In both techniques, a posture or position is taken for turns to be made. This position would either see you skiing faster on edges or fast on split skis.

Parallel skiing techniques need skiers to be in an upward position, raising their body while leaning forward during turns (keeping the upper part of the body in a somewhat upright position).

While carving skiing technique needs skiers to have an upright upper body posture but with their legs rolled at their knees bending the ski well enough for turns.