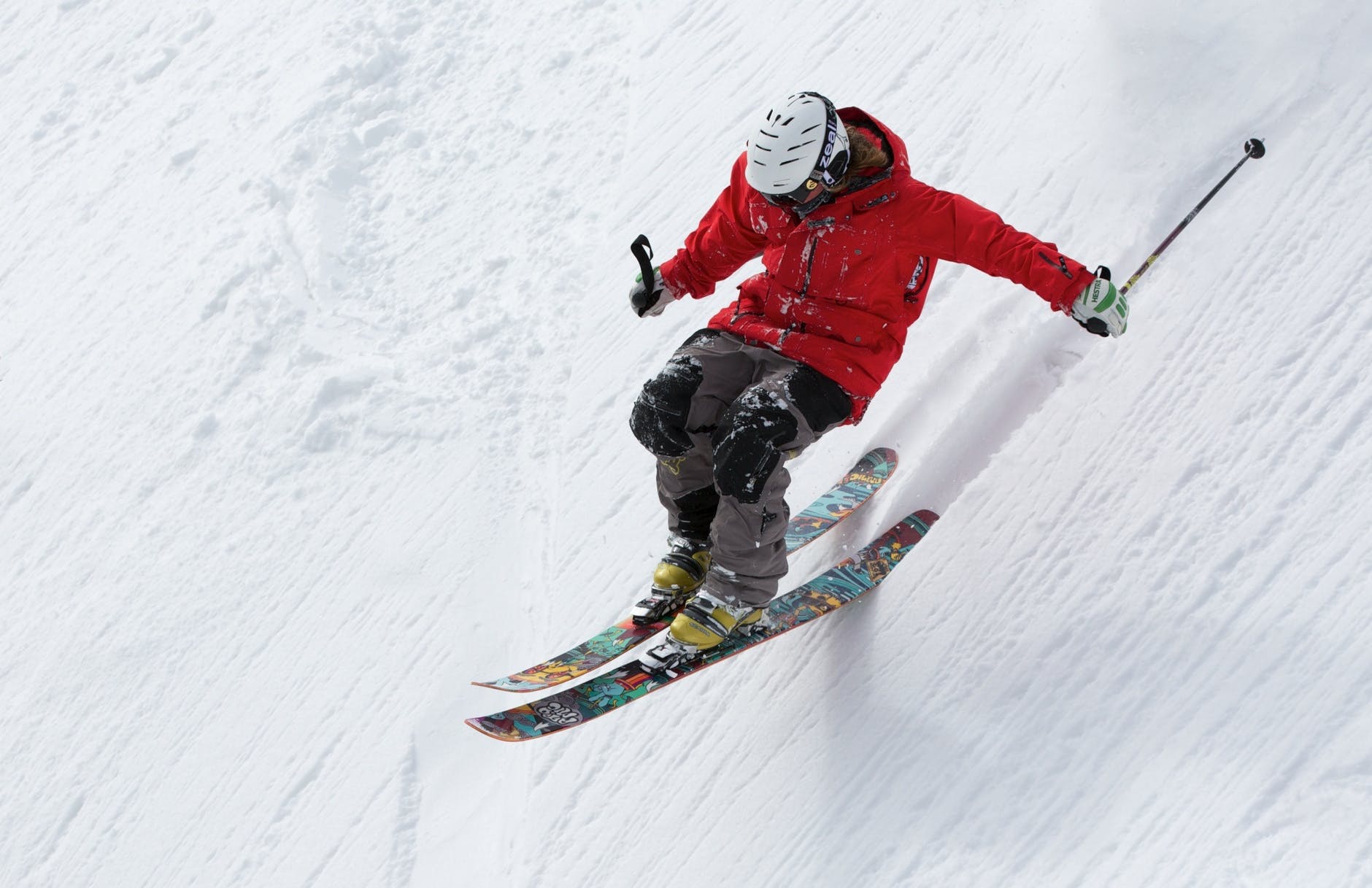 Snowy peaks and stunning glacier scenery seems like a dreamy setting for almost anyone who doesn’t mind the cold. For ski enthusiasts, it’s miles more than just a dreamy setting, offering far more than beautiful panoramas and après delights.

But, with so much gear and equipment to consider when tackling a solid skiing session, it’s important to consider your skis’ camber condition in relation to the overall success of your ski trip.

Understanding camber is essential when getting stuck into the fantastical art of skiing, as it will have an influence on your choice of ski gear and knowledge of how to maintain it over time.

Stick around to find out everything you need to know about ski camber, reasons why they can wear out over time, and how to prolong the longevity of your ski camber.

Why do Skis have camber?

The camber of a ski refers to the area which arches upward underneath traditional skis when they lay flat. The shape of this area is clearly visible when examining skis in good conditions when no pressure is applied to the surface – such as the bodyweight of the skier.

The main function of the camber in the overall design of the ski is for increased functionality and mobility while out on snowy terrain, as the curve allows for a bouncier feel while it’s being used, and offers increased maneuverability when going around bends or turning in different directions.

Within the design of the camber, there is an effective edge area in which the bodyweight of the skier is centrally distributed across, from the tip to the tail of the ski. This feature also assists in ensuring that skiers have substantial grip when venturing out onto icy slopes, offering increased edge contact with the snow.

Its function is served best when snow conditions are high quality and particularly when the snowy ski areas have been groomed.

Reverse camber, otherwise known as a rocker, is also quite a popular option. But, they are very different from traditional skis with camber, as they differ in overall shape and physical attributes, and rest at the center of the ski when laid flat as opposed to camber which has the distinctive arch.

These are great ski variants for increased floatation and smooth gliding over certain snowy areas without snagging. Some hybrid skis actually utilize a combination of both camber and rocker type designs for fantastic overall use. 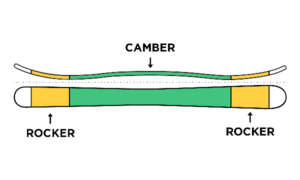 Do skis lose their camber?

Yes, all skis will eventually lose their camber over time, irrespective of how long it may take to happen. There are varying conditions that will result in the skis being unable to maintain their form and structure in the midst of pressure, varying temperatures, a wide variety of movements, and storage plans which are not conducive to retaining the ski structure.

That being said, not all skis are as prone to losing their camber in particular, and older or more fragile skis made of wood will be far more likely to lose camber in a shorter amount of time. Some skis, such as modern versions, are designed specifically so that camber will not be as easy to lose over time, using a combination of modern, durable materials with efficient physical properties and qualities.

Skiers who utilize modern skis do generally do not experience as many issues with losing camber compared to skiers who make use of vintage models or skis made of natural materials.

Ensuring that your ski camber is up to par before hitting the slopes is absolutely essential, as a lack of camber will result in a different level of movability, control, and overall feel while on the snow. It’s best to prepare and have it checked by a professional for safety.

How long does a pair of skis last?

Although skis can last from anywhere between a few months to years, all skis will eventually wear out and will necessitate replacing with a new or more suitably conditioned version. When it comes to camber, the predominant influence for its loss comes about as a result of any cause which can change its shape or alter the form of the arch.

This is mainly due to wear and tear over time, as the ski will inevitably lose its shape and intended form over lengthened periods of use. In some cases, the camber will be completely lost and become almost flat when laid down, without the distinctive visible arch.

Skis can also lose their camber due to certain storage measures while traveling, or while skis are not being used, since the shape can change depending on its positioning when stored or sorted. Of course, every skier has varying storage availability and facilities, and it may not be possible to invest in quality ski racks or similar storage areas.

But, it’s highly recommended to store skis without adding any pressure to the skis in any way.

This is due to the fact that certain methods of storage – such as having skis set horizontally with force being applied to the camber by the use of straps or other means – can result in the overall shape altering over time.

Such a scenario may also lead to the camber arch being flattened out if the condition continues for lengthened durations of time – such as when it’s stored for months at a time out of ski season.

Some skiers resort to DIY mounts for old or wooden skis, using blocks or softer materials to create a rough frame that will support the ski’s camber arch without adding any force or pressure from any direction.

Modern skis do last much longer in this regard, as they are much more durable and have a more rigid form that may not sway as easily as the form of older models would. Such conditions may only make minor alterations to the camber and its effectiveness, as opposed to potentially becoming completely flat and dysfunctional.

The possibility of losing camber

is much lower with modern skis, and this is one of the many reasons why they are such a popular choice for enthusiastic skiers.

Temperatures will also play a role in how much longevity the camber off your skis have, as the material will expand and contract in varying temperatures, and may result in a shifted form. Climate temperatures experienced while out skiing on snowy terrain as well as heat fluctuations in storage conditions may impact the skis whether they are old and wooden or newly made of modern materials.

This is since the materials may change in composition, such as resin which is used in many models starting to flow ever so slowly if heated, eventually amounting to a varied shape once the resin has cooled and settled again. It’s better to store skis in an area with temperatures that do not exceed certain heats and do not fluctuate frequently. 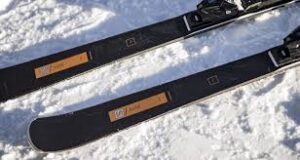 will increase the likelihood of a shorter camber lifespan due to pressure and force on the arch.

Taking photos of the ski’s condition over time is a great way to keep tabs on your camber, as the most effective means of comparison is to view it in relation to the shape and camber arch existing when it was originally bought or received.

The ski should only be resting on the curves between the tip and center, as well as the tail and center, and the camber arch should always be maintained when handling, sorting, storing, and when using it out on the slopes.

It’s fairly easy to tell if your skis are becoming worn out, as signs are mostly visible. Amongst other signs such as cracks, worn edges, uneven bases, or broken bindings, the loss of camber is one of the prominent indications of skis beginning to wear out, and you may need to consider replacing your skis if you notice a change in the arch shape or a witness a visible flattening effect.

When it comes to considering the camber needs of your skis, the loss of camber is something that will inevitably occur over plenty of time spent enjoying this fantastically mesmerizing sport.

But, there are means by which skiers can extend the lifespan of their camber through the choice of a quality, modern ski which are less prone to losing camber, and by storing, sorting, and handling the skis without adding any pressure to the camber or any other points of the ski structure.

It should be kept as balanced and possible with supports to keep its position in place for camber which lasts much longer.